About Chloe
In September of 2014, the Western Team hired Chloe as a new specialist and she brings with her a combination of youth and experience. With a background in All-Around events, when Chloe met husband George Lawrence she added reining to her list. Chloe and George have owned and operated Lawrence Ranch in Texas for 3 years, but have bred, raised and shown reining horse prospects since 2006.

Born in Seattle, WA in 1987, Chloe began showing at a young age by starting in 4H events in 4th Grade. When she moved to Fort Worth, Texas to undertake a Bachelor of Science Degree in Movement Science at T.C.U., the university did not have an equestrian program. However, an Equestrian Team was started in the 2006-2007 academic year and Chloe competed on the Western Team and was part of the undefeated 2008 team that won the Varsity Equestrian Western National Championship.

Chloe’s knowledge of Markel began as a policy holder. She was very impressed by our company, so given that she already had her agent license, she made inquiries about how she could be a part of Markel and the Western team.

Chloe and George are the proud owners of Wimpys Littlecolonel (http://wimpyslittlecolonel.com/) who had a successful first breeding season in 2014 and are anxiously awaiting his first foal crop. He most recently won the AQHA Reserve World Title in the Junior Reining in Oklahoma City in November (see video - https://www.youtube.com/watch?v=MhK_1vY5xBw). 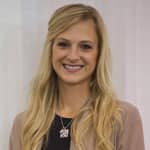