Be aware, there may be a catalytic converter thief out there 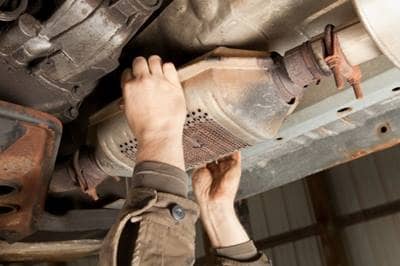 In case you have not seen or heard the news lately, theft of catalytic converters is now an epidemic.  Thieves are targeting converters because they contain a combination of three metals: platinum, rhodium, and palladium, which can be sold at local scrap yards for $50 to $250 per converter. The values of these precious metals have increased significantly over the last few years. As of March 1, 2021, rhodium was valued at $27,400 per ounce, palladium is approximately $2,383 per ounce, and platinum going for $1,130 per ounce. Typically, recyclers will pay $50 to $250 per catalytic converter; making a catalytic converter a potential revenue source for thieves.

According to the National Insurance Crime Bureau’s Operations, Intelligence and Analytics study of reported thefts, there were 108 catalytic converter thefts per month on average in 2018, 282 average monthly thefts in 2019, and 1,203 average thefts per month in 2020. During this time period, the top five states for catalytic converter thefts were California, Texas, Minnesota, North Carolina, and Illinois. In 2020, there was a continual climb in thefts. January had the fewest number of thefts at 652, but it continued to climb markedly throughout the year, with December having 2,347 thefts.

These thefts only take seconds to achieve. Because centers often park their vans in remote parking areas that may not be readily visible; it is important to take every precaution in order to reduce the likelihood of your vehicle(s) becoming a target.

The following recommendations may help you implement strategies to prevent this crime from occurring to one of your vehicles.

It is estimated that a thief with a plan and power equipment can remove a catalytic converter in less than 60 seconds. If you see something suspicious, document what you see and report it to the police immediately.