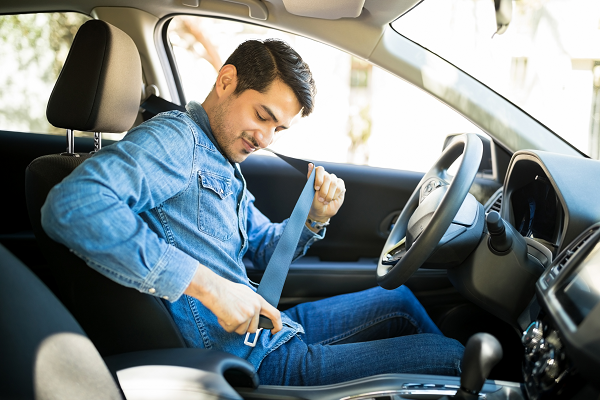 The National Safety Council estimates that more than 14,000 persons die every year in highway crashes that would not have been fatal if seat belts had been used. These 14,000 deaths could have been prevented by merely “buckling up.” Most vehicles in use today are equipped with safety belts. The problem is that many drivers and passengers fail to use them. Many people have arguments against the use of belts, but little evidence to support their objections. Let's examine a few of these objections and see what the experts at the National Safety Council have to say about them. “Safety belts are all right when I have a long way to travel, but on short trips they're a real nuisance.” Buckling and unbuckling a few extra times is a heck of a lot easier than banging your head against the windshield should you have an accident. Besides, most motor vehicle accidents happen within 25 miles of home and at speeds below 40 miles per hour.

“If I’m in an accident, I don’t want to be trapped in my vehicle during a fire or if it goes into the water.”

Chances are that if the crash is severe enough to trap you in the vehicle, you will be trapped even if you aren’t wearing a belt. Besides fires occur in only 0.2% and submersion in only 0.3% of all injury producing accidents. Even then your safety belt can increase your chances of escape by keeping you from being knocked unconscious.

“I’m a good driver—never had an accident. Why do I need safety belts?”

Statistics show that four out of five drivers involved in accidents never had one before. In addition to reducing injuries and saving lives in accidents, safety belts are comfortable, give you better control and make you less tired. Once the safety belt habit is acquired, you will automatically buckle up every time you get into your vehicle.

“It’s a free country and no one can make me wear seat belts if I don’t want to!”

That’s right—no one can force you to use safety belts. We do live in a free country and we do have freedom of choice. Keep in mind however, freedom means that we abide by the laws that are intended to protect us from harm. Most states have laws that require the mandatory use of seat belts. Should you choose to ignore the law, then be prepared to pay the price when you are caught not wearing them.

“I don’t wear the belts because they mess up my clothes”.

What is worse, showing up for a date or arriving at work with a few new wrinkles, or not getting to your destination at all because you’re dead? Being thrown from vehicles, or becoming a projectile inside the vehicle, during accidents almost always kill people.

“My vehicle is equipped with an automatic shoulder belt attached to the door, so I don’t have to worry”.

This is called a passive restraint, and you should worry because it will not protect you from serious injury during an auto accident. In an accident situation, the force of the crash impact can throw your body under the shoulder belt leaving you to bounce around inside your vehicle, or tossing you out. Always, repeat; always wear a properly adjusted lap belt with your shoulder belt. This goes for all passengers in your vehicle as well.

Hopefully, you will make the right choice and make the use of safety belts a habit. They do save lives.