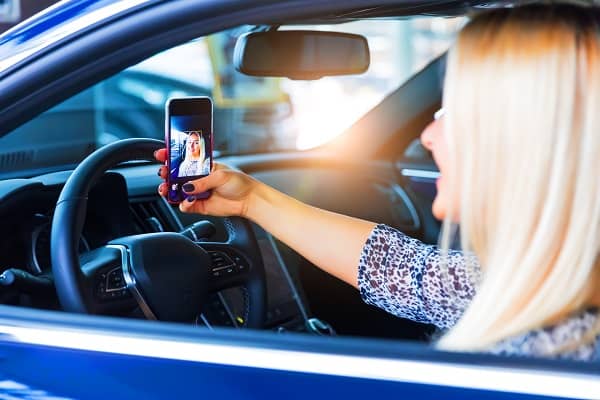 Drivers may experience manual, visual and cognitive distractions. Texting has been described as the “perfect storm”, which creates all three distractions and increases the risk of crashing by a factor of 23.2. It is estimated that driver distraction is a factor in about a quarter of all crashes and 8.5% of fatalities. Driver distraction is a specific type of inattention that occurs when drivers divert their attention from the driving task to focus on something else. The impact of the distraction is determined by the frequency and duration of the diverting task. Drivers underestimate the overall risk of distraction, because distractions are not recognized as goal irrelevant pieces of information. The pervasive use of technology, particularly personal media, outside of the driving environment is such that limiting access to it while driving has become a major stressor. On the other hand, the innovative features of the technology required to operate a vehicle create complex interfaces: touch screen visual displays, joystick input methods, voice interfaces and head-up displays. The combination of stress and increased workload on the driver leads to driver performance impairment, as evidenced by reduced eye scanning, slower reaction time, degraded vehicle control (increased vehicle weaving within lane), and a lower detection of critical objects in peripheral vision.

According to a survey of 2,000 drivers, the type of technology and driver age impact behaviors. Thirty-seven percent of 18 to 34 year-olds reported feeling a high degree of pressure to respond to work-related calls while driving, compared to a national average of 25%. iPhone and Apple Carplay users are more than twice as likely as Android users to video-chat, use Instagram, stream shows, and take pictures while driving. These driving behaviors correlate with non-driving lifestyle. We have a new pattern of engagement with media, we media multitask. This creates new social expectations, we perceive the need for immediate responsiveness and continuous productivity. Unfortunately, productivity may be experienced as doing anything, whether or not it is related to a specific, meaningful goal. Adult Americans check their phones 150 times a day, or every six to seven minutes they are awake. Three quarters of smartphone users feel panicked when they can’t find their phone. Half check their phones upon awakening, a third while using the bathroom and about a third when dining in a restaurant with guests. Americans send over 7,500 tweets, 1,394 Instagram photos, 2 million emails and view 119,000 YouTube videos per second. Americans send over six billion texts every day. Does this sound like compulsive behavior? Addictive behavior?

There is a Text Neck Institute in Florida that was created to deal with young people who had neck, back, arm, and shoulder pain from excessive phone use. A 2015 study showed a link between hyper-texting (120 per day) and poor academic performance. It is estimated that 20% of teens are hyper-texters. In addition to enhanced risk for behavioral and mental health problems, they were more likely to have tried alcohol, illegal drugs, and almost three and half times more likely to have had sex; stunningly, these teens were 90% more likely to have had four or more sex partners. Clearly, there are impulse control issues that can be correlated with excessive use of media. Use can activate the reward centers of the brain that make us feel good. The first part of the reward pathway is the ventral tegmental area (VTA). When VTA neurons fire they send Dopamine (the feel good neurotransmitter) to the nucleus accumbens (NA). The NA is the part of a learning pathway that teaches us what feels good by releasing endogenous opioid peptides (EOPs) that have the same effects of morphine and heroin. Simply, use of media like texting or checking for messages can result in a squirt of dopamine followed by a squirt of EOPs that give us a morphine-like feeling of bliss. Although one might not be aware of feeling blissful, this process accounts, in part, for the uneasiness experienced when not using personal media/technology.

We have the same brain when we’re driving and when we’re not. Although we limit the use of media/technology while driving at work, the excessive use of them in our daily lives might make us feel uneasy or unhappy at work when we’re not using them. Not getting happy juice as frequently or in the manner we have trained our brains to respond to can limit our cognitive control capabilities. Cognitive control is the thinking process that allows us to achieve the goals set by our executive functions. We evaluate, decide, organize and plan to achieve our goals. How much work, training, and planning has gone into achieving your goal of safe driving? Will any of these efforts be effective if the driver can’t distribute, divide, and sustain attention? How many factors create interference that will make it difficult for us to drive safely if we can’t actively hold detailed information in mind and react to it properly? It is frightening that distracted living might impair our ability to drive without distraction.