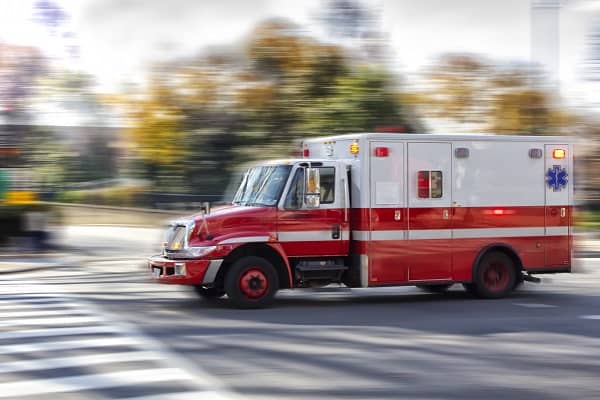 You might be thinking that with the EVOC, CEVO, Arrive Alive Do No Harm, in-house driver training, onboard monitoring, and pre-hiring approval of driving records that crashes in medical transportation would be decreasing. Unfortunately, that’s not the case. EMS personnel are 2.5 times more likely to die in a crash than other workers. Roughly 70% of fatal crashes occur while running hot. Firefighters have a transportation fatality rate of 5.7 per 100,000 personnel, police 6.1, but EMS practitioners lead at 9.6. When we look more closely we find that in fatal ambulance crashes the driver of the ambulance comprised 4% of those killed, ambulance passengers 21%, occupants of other vehicles 63% and non-occupants 12%. Fortunately, only 1% of ambulance crashes involve fatalities. A common risk management principle is that frequency is predictive of severity. Think about it this way. The greater the number of driving errors we make that cause collisions, even those with minor or no damage and near-misses, the greater the likelihood that a fatal collision will occur. Instead of dealing with emergency driving, we will address other risk factors.

When you're driving, driving is your primary responsibility. Anything that takes your mind off driving (cognitive distraction), your hands off the wheel (manual distraction) or your eyes off the road (visual distraction) puts you at risk. It must be noted that hands' free cell phone use is just as dangerous as hand held. Studies have shown that those using hands' free cellphones performed worse than drivers who were legally intoxicated. Reaching for a moving object (is your supersized soft drink tipping over?) increases the risk of crashing by a factor of 8.8 (that's times not a percent), drinking 4.1, eating 1.6 and texting 23.2. Keep this in mind. You need to be paying attention to driving to be distracted from it.

A good number of crashes are caused by following too closely. If the vehicle in front of you is smaller than the vehicle you are driving, it will be able to stop more quickly. To stop you must perceive the need to stop, react to the perception and apply the brakes. At 30 mph you will travel about 174 feet before you stop. One method to determine a safe following distance is the 4 second rule. At 30 mph you should be 4 seconds behind the vehicle in front of you. Pick a fixed object and note when the vehicle in front of you passes it. It should take you 4 seconds to reach the object. For each 10 mph over 30 mph add 1 second to the following distance. Also add 1 second each for rain, snow, fog, sun-glare, and road conditions. What if traffic conditions make the 4 second rule impractical? Slow down. You are in a high-risk driving environment.

Backing is always dangerous. A paramedic was killed when struck by an ambulance in the headquarters' parking lot. Backing is always the result of preventable driver error. Mirrors should be adjusted at the beginning of shift and maintained throughout the day. Mirrors can be properly adjusted only when the vehicle is straight. If you don't have a spotter, determine your line of travel by walking around the vehicle checking for obstructions and overhangs. Know the height of your vehicle and look for signage. If it looks too close, it probably is. When backing turn towards the driver's side. Naturally, it is better to have a spotter to help the driver. The spotter should be 8-10 feet at the rear of the vehicle on the driver's side. The driver should stop if contact with the spotter is lost. It is surprising that some services do not have uniform hand signals. The EVOC curriculum has day and night versions of 11 different hand signals. Hand signals should be specified in policy and procedures, taught in orientation with documentation of proficiency, and monitored by supervisors for compliance.

In addition to the risks encountered during emergency operations, intersections pose significant dangers in non-emergency circumstances. Uncontrolled intersections are usually in residential areas with low traffic density. Stop for pedestrians, vehicles already in the intersection and traffic to the right. At intersections controlled by yield signs, slow down and stop as necessary for pedestrians and other vehicles. The unpredictability of the behaviors of other drivers at yield signs requires enhanced situational awareness. Make an assessment of traffic in all directions before proceeding. Two-way controlled and 4 way stop sign intersections require us to come to a complete stop. Tapping the brakes and gliding through is not acceptable. Stop in front of the limit line and proceed only when it is safe and legal to do so. Traffic signals require special consideration. When stopped at a red light you should see the rear tires of the vehicle in front of you to create an 8-10 foot cushion. A stale green light is one you didn't see change from red to green and requires a cautious approach. In general, yellow lights stay yellow for one second for every 10 miles per hour of the posted speed limit.

Make safe driving a habit. A habit consists of a cue, whatever prompts the behavior, a routine, the behavior itself, and a reward, the payoff that trains our brains to repeat the habit in the future. Not having minor crashes, which decreases of likelihood of getting killed or killing somebody else, is an adequate reward.