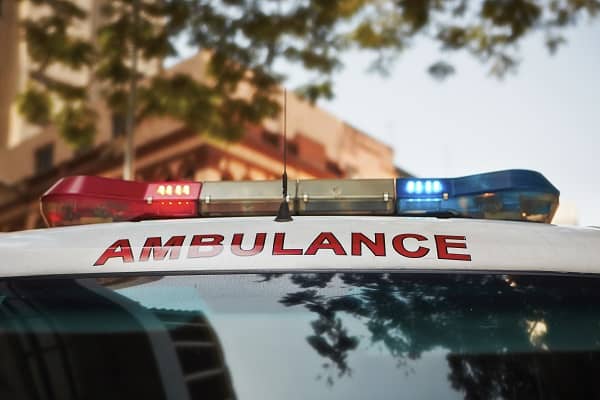 It is common practice to have a policy indicating that personnel do not fight psychiatric patients who want to leave the ambulance. The usual response is to pull over, stop the ambulance and notify law enforcement. One might argue such actions constitute a standard of care. Consider the following scenario.

An ambulance crew was dispatched to a hospital to perform a non-emergency transfer to a psychiatric facility for a patient with the diagnoses of altered mental status, acute confusion, suicidal behavior, and hypoxia. He had a history of PTSD and COPD. Upon arrival, the crew found the patient to be co-operative, pleasant and in no acute distress. His vital signs were 126/88, 84, 18 with a hemoglobin saturation of 90%. After communicating with nursing staff and receiving appropriate documentation, the crew was told the patient was “good to go”. He walked to the cot, obeyed all requests, and when placed in the ambulance appeared to be sleeping. In route the attendant sat in the captain’s seat. The driver stopped the vehicle to confirm a GPS routing and resumed moving. The stopping and starting motion of the vehicle apparently startled the patient. The attendant was speaking with the driver when the patient arose from the cot. The attendant moved to stop the patient and was elbowed by him. The patient left the ambulance while it was moving at 30 mph. He died from the subsequent injuries. Litigation ensued. The hospital and ambulance service were each required to pay $3.5 million. For such damages to be awarded in this particular state, the actions of personnel not only had to breach a standard of care, they had to reach the level of willful and wanton.

Standard of care is defined as: “The type and level of care an ordinary, prudent, health care professional with the same training and experience would provide under similar circumstances in the same community.” To be willful and wanton the actions must show “actual or deliberate intention to harm” or if not intentional, must “show an utter indifference to or conscious disregard” for a person’s own safety or the safety of others. These definitions were part of the instructions given to the jury in this case.

A psychiatrist testified that due to the patient’s PTSD he had an exaggerated startle from the “long term potentiation” of his flight or fight response. He stated that the stopping and starting motion of the ambulance to check the GPS activated this startle response. The patient was not suicidal in his estimation. His elopement was solely the result of the startle. The EMS expert, a highly experienced, credentialed, nationally recognized figure stated that by sitting in the captain’s seat rather than the squad bench and failure to prevent the patient’s exit demonstrated “conscious disregard”. Although the EMS expert could not cite any literature or scientific evidence to support his contentions, the jury apparently bought his argument that it would have been easier to stop the patient from the bench. Apparently, the expert was not familiar with the NHTSA work that shows it is unsafe to sit on the bench. It is clear from this case that well-planned, exquisitely documented protocols, policies and procedures must be in place.

Get with local counsel to insure compliance with all laws and training standards. Counsel should be involved with all contracts or memoranda of understanding. Document that the relationship with law enforcement guarantees a “collaborative and coordinated response.” Operationally, get a thorough history. Does the patient have a history of violence? Has the need for mechanical restraint, sedation or previous elopement occurred? Ask specifically if restraints are needed and obtain written orders. The sending facility should give the patient early notification. Transfer “surprises” may be upsetting. Are there concurrent clinical issues that require interventions? These should be addressed prior to transport. The patient should always be on the cot positioned in the lowest center of gravity with all belts, including shoulder straps, in use. The side of the buckle marked “press” should be upside down. Watch the patient’s hands. Be wary if the patient fails to follow directions. Restrain as ordered or clearly determined by protocol. Have a distress signal in place so the driver knows to stop the ambulance, broadcast the location and request law enforcement. If patients become violent, flee and take cover as necessary.

This case clearly demonstrates that we must be able to validate and document the reasoning behind all of our actions in dealing with patients. It’s not just a matter of winning litigation. It’s doing our best to care for those entrusted to us.