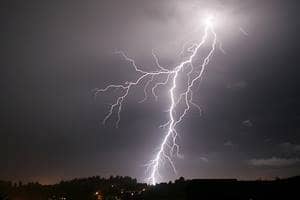 Thunderstorms
All thunderstorms are dangerous and every thunderstorm produces lightning. While lightning fatalities have decreased over the past 30 years, lightning continues to be one of the top three storm-related killers in the United States. On average in the U.S., lightning kills 51 people and injures hundreds more annually. Although most lightning victims survive, people struck by lightning often report a variety of long-term, debilitating symptoms. 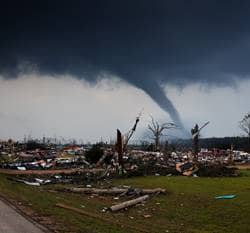 Tornadoes are nature’s most violent storms. Spawned from powerful thunderstorms, tornadoes can cause fatalities and devastate a neighborhood in seconds. A tornado appears as a rotating, funnel-shaped cloud that extends from a thunderstorm to the ground with whirling winds that can reach 300 miles per hour. Damage paths can be in excess of one mile wide and 50 miles long. Every state is at some risk from tornadoes and no place is totally safe from tornadoes.

Floods and flash floods
Floods are among the most frequent and costly natural disasters in terms of human hardship and economic loss. As much as 90 percent of the damage related to all natural disasters (excluding drought) is caused by floods and associated debris flows. Flooding occurs in known floodplains when there is prolonged rainfall over several days, intense rainfall over a short period of time, or when ice or a debris jam causes a river or stream to overflow. These disasters may also occur during the winter and early spring when melting snow is combined with rain; in the spring and summer when there are thunderstorms with heavy rain; and in the summer and fall when there is intense rainfall from tropical cyclones in coastal and inland states. Flash floods can occur within six hours of a rain event, after a dam or levee failure or by a sudden release of water held by an ice or debris jam.

You will not always have a warning that these deadly, sudden floods are coming. So if you live in areas prone to flash floods, plan now.